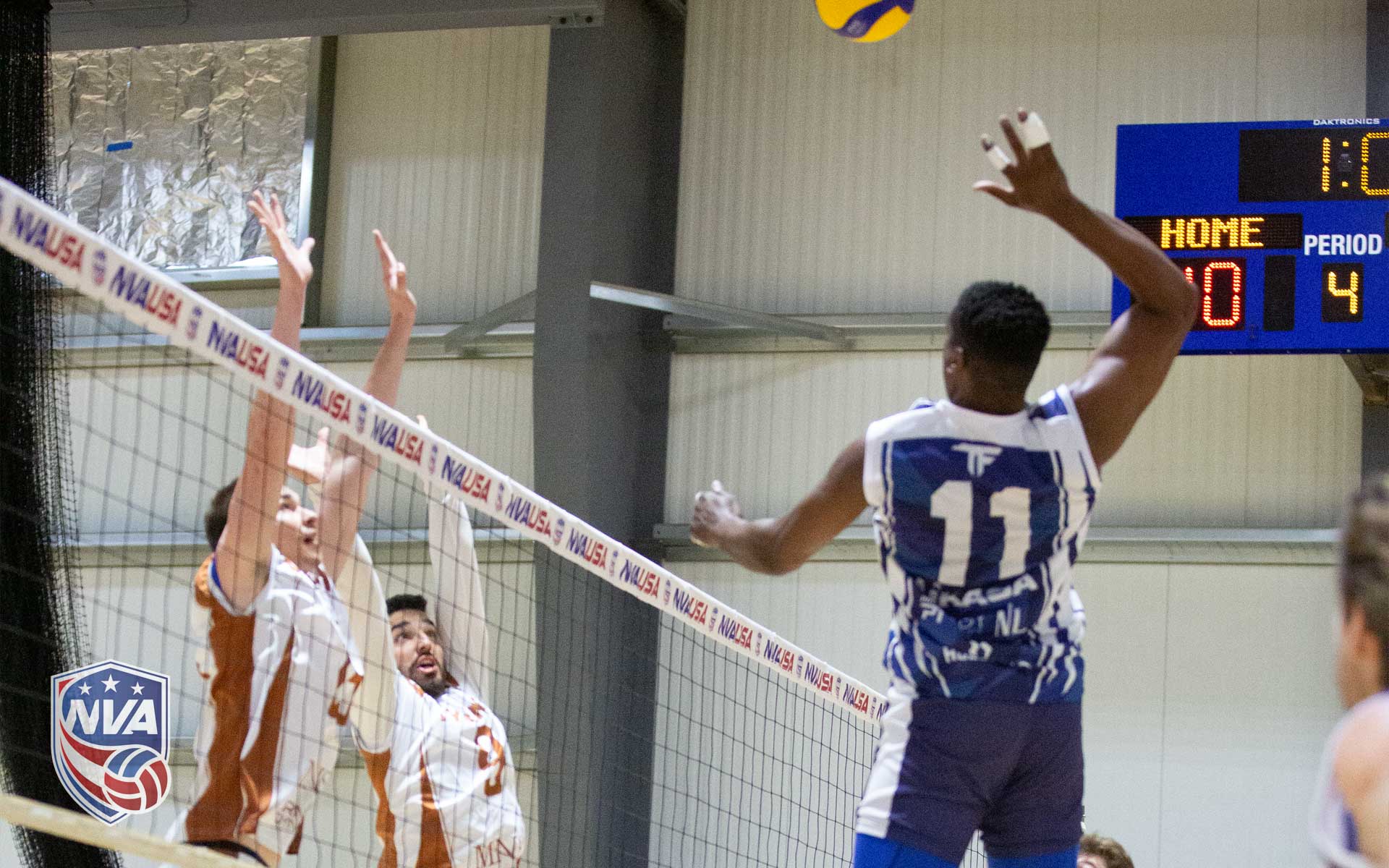 Southern Exposure dominated set number three that started with a 5-0 run from two Team Freedom hitting errors and kills by Mercado and #8 middle blocker Tim Lourich and block by Lourich. At 9-4 Southern Exposure increased their lead to 7 points at the media timeout with a combination of Team Freedom hitting errors and kills by Seifert, Dzema, Arsiani and Mercado for a 16-9 lead. The only offense Teams Freedom mustered was from Lutz who had 5 consecutive kills. For the rest of the set the only other scores for Team Freedom came on kills by #2 Jake Rosner, Dzema and Nelson. Southern Exposure closed out the set with two consecutive service aces by Rocklein, one kill and one service ace by Ofoha. The set ended on a service error by Team Freedom at 25-15.

Both teams started off sluggish and struggled to find a rhythm in their offense. Eight of the early points were scored on hitting and service errors. Team Freedom took the early lead on kills by #12 Matt Seifert, #20 Joe Norman, and double block by #11 MB Mikheil Hoyte and Norman. Ramblers scored points on kills by #14 Ryan Mather, #15 Kevin Lopez, #24 MB Mark Lane and #20 Brandon Rattray. At 19-17 two Ramblers’ service errors and one hitting error increased Team Freedom’s lead to 4 points at 22-18. Ramblers cut the lead back to 2 points on kills by #2 MB Sean Dennis and Lopez to 22-20. At 24-21 Mather scored on a service ace to 24-22. After Team Freedom called a timeout, Norman scored on a line kill for a 25-22 Team Freedom win.

In set number two Ramblers quickly found their stride and took a 6-1 lead that started with a double block by Rattray and Lane. Followed with kills by Rattray, Lane and Mather. After Team Freedom called a timeout, Ramblers added to their lead from a Rattray bic and service ace to 9-1. Team Freedom finally scored their first clean point at 11-3 after a Norman cross court kill. For the rest of the match Team Freedom only scored 5 clean points on kills by #8 Besmir Arslani, #2 Jake Rosner, Seifert and Hoyte. Their other points came from Ramblers  hitting and service errors. Ramblers cruised the rest of the set and scored on kills by Mather, Dennis, #8 Setter Michael Keegan dump, Rattray and Lopez. The set ended on a service error by Team Freedom that gave the Ramblers a 25-17 win.

Ramblers started off strong in set number three and took an early 2-0 lead on two consecutive kills by Mather. One cross court and the other a swipe off the block. Ramblers kept their two point lead until Team Freedom tied the score at 8-8 on kills from Norman, Seifert and Rosner. As the teams exchanged points, Ramblers held on to a 1-point lead until Team Freedom took the lead at 14-13 on a Norman swipe kill off the block. Team Freedom increased their lead before the media timeout on a Rosner block to 16-13. Ramblers attempted a rally on kills by Dennis, Rattray, and Lopez but never caught up withTeam Freedom. Team Freedom finished the set with 4 kills by Norman and a block by Seifert. The set ended on a Ramblers hitting error for a 25-19 Team Freedom win.

The Ramblers and Team Freedom’s hitters struggled to find the court in the beginning of set number four. Each time committed four hitting and service errors. Team Freedoms other points came on kills by Seifert, Hoyte, Arslani and block by Seifert. Ramblers scored on kills by Rattray, Lopez and Mather service ace. After an 8-8 tie consecutive scores by Mather and Rattray and then Lane and Lopez gave the Ramblers a 4-point lead at 14-10. After the media timeout at 16-12 the only Team Freedom players who scored points were Rosner and Hoyte. The rest of Team Freedom’s points were scored from Ramblers’ service and hitting errors. Throughout the set Rattray was the go-to-guy for the Ramblers. Before the media timeout he had 5 kills. After the media timeout he collected 5 more kills. The other points for the Ramblers came from Mather and Dennis, who had the final kill to end the set at 25-21.

Tyrants’ #9 Gianluca Grasso scored the first clean point of  the match on a tool. Both teams came out swinging and only committed three hitting errors and two service errors in the beginning of the set. Tyrants scored points on kills by #17 Tim Johnson, #15 Ryan Maune and Grasso. Team Freedom scored on kills by #11 Mikheil Hoyte, #18 Jonathon Lutz, #17 Keith Kegerreis and a double block by  Hoyte and #4 setter Matt Elias. After a Team Freedom hitting error at 8-8, Tyrants increased their lead by 3 points on a Grasso kill, another Team Freedom hitting error and kill by #15 Ryan Maune at 14-11. Team Freedom made an effort to rally back with kills from a dump by setter Elias, kill by #2 Jake Rosner, Elias service ace, Hoyte kill and #19 Jeffrey Nelson. Tyrants scored on points by Maune, Grasso, 3 consecutive kills by #22 MB Austen Lovett and closed out the set on kills by #1 Anthony Robinson and #16 Daniel Jacobs 25-20.

In set number four Joe Norman scored Team Freedom’s first four clean points that helped his team take a 2 point lead at 5-3. Tyrants countered with kills by Grasso, Robinson and Jacobs to a 6-6 tie. On the next possession Tyrants took the lead on a Maune kill. A Grasso kill and kill by Acfalle after a Team Freedom overpass gave Tyrants a 10-6 lead. At 11-8 Grasso and Lovett scored back-to-back kills for a 13-8 lead. Team Freedom tied the score after consecutive scores by setters Elias from a dump and service ace, two consecutive Tyrants hitting errors and Seifert block. A Rosner kill after a Tyrants’ overpass gave Team Freedom the lead 14-13. Seifert followed up with kill to 15-13. Tyrants rallied back to tie the score again on a kill and service ace by Grasso and block by Robinson to 16-16. Team Freedom kept their lead from a Norman kill to 17-16. But Tyrants retook the lead at 20-19 after a Jacobs kill and service ace. At 22-22 Team Freedom took the lead back on a Elias block 23-22. After Grasso scored on a kill to 24-23, Team Freedom won the match on a block by Rosner 25-23.

Team Freedom took the early lead in set number five on a kill by Rosner, Tyrants’ hitting error and two kills by Norman to 4-3, while Tyrants scored on a kill by Jacobs and two kills by Robinson. After Maune scored skill that tied the score 4-4, Tyrants started a mini run with another Maune kill, Robinson kill, service ace by Jacobs, double block by Robinson and Maune and Robinson kill for a 9-4 lead. While the Tyrants sided-out, Team Freedom committed hitting errors that kept them from launching a rally. At 13-9 Tyrants scored on a kill by Jacobs to 14-9. Teams Freedom sided-out on a Norman kill and then Jacobs scored set and match point on a line kill off the block 15-10.