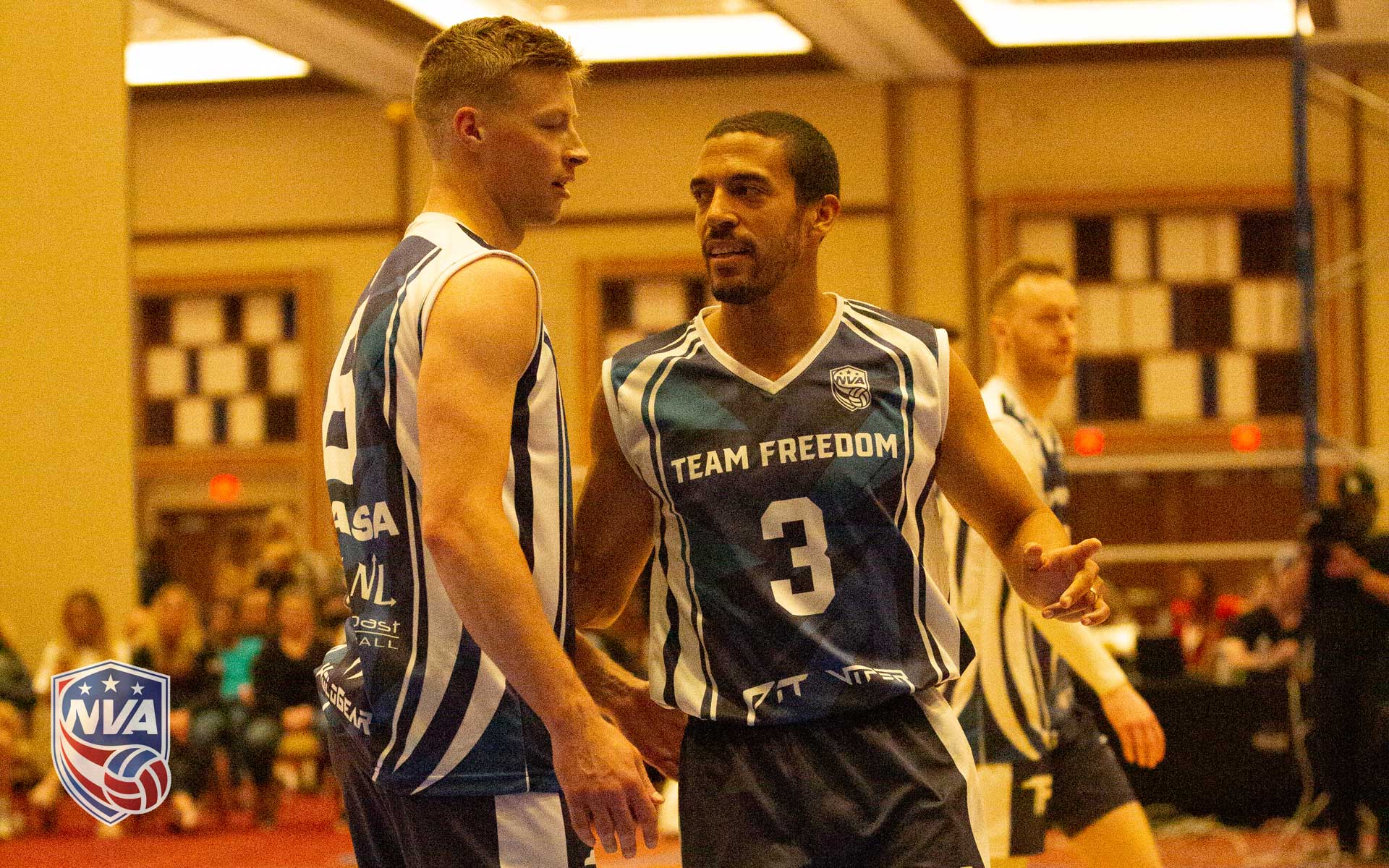 The match started off with both teams going pound for pound with heavy swings from Travis O’Gorman and Matt Seifert and craftier tips from Pedro Nieves. LA Blaze managed to get some early separation with consecutive blocks from Edison Zhou and Pablo Guzman, digs from Ricardo Massanet, and a fast back-row attack from O’Gorman. After a controversial double wasn’t called on LA Blaze, the team went on a seven-point service run giving Blaze a 20-12 lead. Team freedom still managed to fight hard with long rallies and impressive saves from Jordan Robinson. Steven Morales put in the final daggers of the set with a kill and service ace to end the set 25-16.

Set had a similar start with both teams going kill for kill, with Morales leading the charge with three early kills for LA Blaze. Where one team excelled, the other responded with Keith Kegerreis scoring a colossal ace to only have Guzman returning with a massive cross-court shot. However, after tying at 8-8, LA Blaze seemed to break down after a momentum-changing overpass kill by Arslan Besmir. Team Freedom pushed hard on a five-point service run, allowing them to gain a seven-point lead at 18-11. Blaze made a heroic effort to return from their deficit by making it to 25-19.

Travis O’gorman continued to be the kill leader for LA Blaze, scoring three of four Blaze’s first points. At the same time, Christopher Nugent and Besmir gained the first points of set three for Team Freedom. As the set developed, neither team could solidify a lead with errors at every other point, including nets and foot-faults on top of numerous hitting and service errors. Guzman helped to break away with a massive block at 16-16 and collect 4 digs in the set to help give LA Blaze more opportunities to score in the late game. Three service errors by Besmir, Kegerreis, and Seifert put Team Freedom in the grave as LA Blaze took the set 25-22.

Early on, Blaze took a 6-1 lead with kills from O’Gorman and a block and kill from Greg Faulkner while Team Freedom continued to make errors. LA Blaze held onto their five-point lead until O’Gorman made a string of three errors which allowed Team Freedom to get up to two points behind at 16-14 and force Blaze to take a timeout. From the timeout, Team Freedom’s Kegerreis and Seifert both put up blocks which finally tied the set at 18-18. Team Freedom then held a slight lead until Christopher Vaughan tragically sprained his ankle during a block and is subbed from the game. Rallying together for their fallen comrade, Team Freedom fought neck and neck with LA Blaze until a hitting error by Morales gave Freedom the winning point at 26-24.

The fifth set was an exhilarating deathmatch as both teams, now 2-2, desperately fought to get the upper hand on the other. No team could take the lead until after two blocks by Matt Seifert put Team Freedom at 11-9. Joe Norman came in clutch at the end to get two kills at 13-11 and 14-12 and the final point taken by Besmir to end the match 15-13.

To start the match, the Utah Stingers came out to a decisive lead of 7-0, with kills from Jorge Mencia, Cory Metcalf, and Storm Fa’agata-Tufuga. A kill from Christopher Nugent finally stopped the bleeding. Still, the damage was already deep enough that it seemed impossible for Team Freedom to make it back in the set. A late string of points was started with a block and ace by Joe Norman and intense defensive pressure at the net, bringing Team Freedom from being down 17-10 to 18-15. However, the Stingers came back harder with an ace from Alex Shmelev and a block by Fa’agata-Tufuga, which helped to end the set 25-18.

Team Freedom came back strong with setter Matt Elias taking the reigns with a deep tip to the corner and a block on Fa’agata-Tufuga, gaining a lead of 8-4 at the technical timeout. Unfazed by being blocked, Fa’agata-Tufuga returned the favor by gaining four kills and two aces to bring the Stingers within one at 12-11. Team Freedom desperately tried to stay in the lead as the Stingers trailed by one until 19-18. With a kill by Nugent, an ace from Elias, and a kill by Matthew Seifert, Team Freedom finally pulled away to 22-18. The team effort allowed Freedom to coast to the end and win the set 25-22.

Team Freedom got an early lead of 7-3 with a pair of blocks from middle blockers Seifert and Mikheil Hoyte. After a few Team Freedom hitting and serving errors and two consecutive kills by Mencia, the Stingers got back in the game at 10-10. The two teams were only two points apart for the rest of the set as Team Freedom’s errors continued to allow the Stingers in the game. The Stingers eventually pulled away as Fa’agata-Tufuga, Mencia, and Shmelev dominated at the net. At the same time, libero Chandler Baugh’s five digs secured the backcourt. Stingers take the set with a strong lead of 25-20.

Team Freedom brought out the block party with two from Elias and one from Seifert, which squashed any Stingers’ energy from their last set win. A strong float from Seifert gave Josue Castillo a perfect overpass to kill the ball and put Team Freedom up 8-3 into the technical timeout. Freedom continued to go on a field day without any resistance from the Stinger’s side. Winning the set 25-15, Team Freedom developed the most significant point differentials of the entire weekend event against the top two teams of the American conference.

Team Freedom continued to carry the energy of their last set with a kill from Nugent and another block from the big man Seifert. Stinger’s points came from Team Freedom errors as the Utah team struggled to stay together as a cohesive unit, not scoring a point of their own until they were already down seven points as Freedom led 12-5. The late kills by Mencia and Paul Clark weren’t enough to bring the team from the grave as Castillo and Norman’s kills put the nail in the coffin to give Team Freedom the set at 15-6 and the match at 3-2.

Set one begins with consistent sideouts from both teams, with Joe Norman producing three kills for Team Freedom and Jacob Vander Beek putting in most of the work for Ontario, unfortunately the Matadors have been consistently missing serves but a net from Mikhel Hoyte give the Matadors the lead going into the technical timeout, score 6-8. The Matadors were able to maintain a three point lead through most of the middle of the match, but two kills from Mikhel Hoyte and an ace from Ronald Dunn tied the game up at 16-16. Both teams continued to sideout at a high rate, taking the game into extra points until a kill from Martin Petris, an ace from Jesus Serrano and a block from Diego Bustas gave the Matadors the win. Final score 27-25.

Set two begins with Team Freedom missing multiple serves, while kills and an ace from Jesus Serrano were able to help give the Matadors a demanding lead going into the Technical timeout, score is 8-3. The Matadors were able to hold a lead as high as 12-7, but Team Freedom started to respond with multiple kills from Joe Norman and Chris Nugent, which complimented the hitting errors performed by the Matadors, score is 16-15 Matadors in the lead. Two blocks from O18 then allowed the Matadors some separation, but relentless sideouts and kills from Mikhel Hoyte and Joe Norman were able to bring it back for Team Freedom as they tied it up at 20-20. The Matadors then had enough with kills from Jesus Serrano and Matt Siefert, and two blocks from O18 ended the game, 20-25 Matadors win.

Set three started off a little more even keel, and forced Team Freedom to put in their starts with Matt Seifert coming back in the middle and Matt Elias coming in to set. Although Team Freedom made these changes the Matadors were able to keep the point spread close as they went up one point into the technical timeout, 8-7. A block from Gilberto Sanchez starts the run for the Matadors, as Team Freedom can’t seem to get out of their own way, making numerous hitting and service errors, the Matadors go up 18-13. The three blocks from Gabriel Cruz and two aces from Jesus Serrano drove the momentum home as the Matadors beat Team Freedom 25-15.