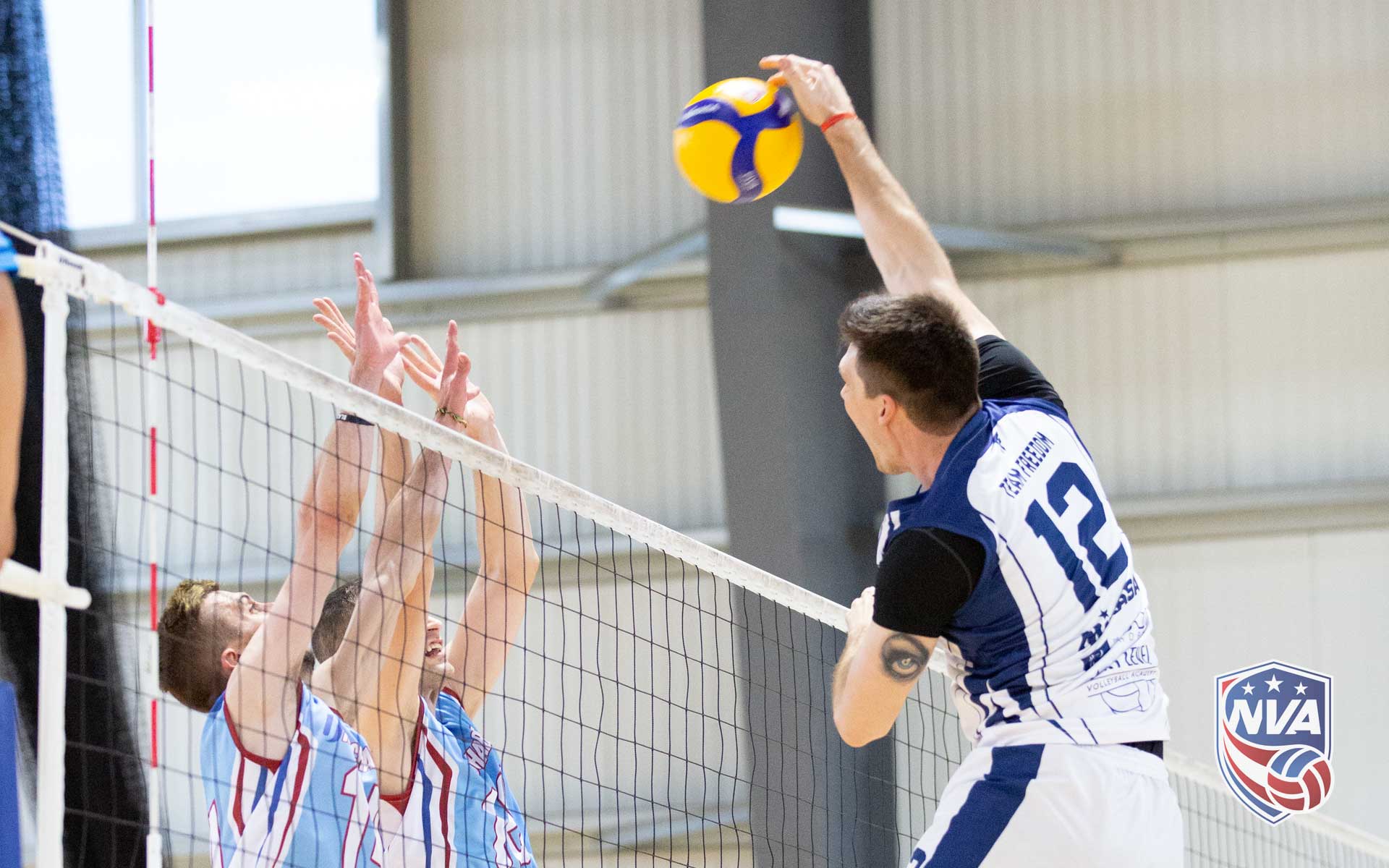 Tornadoes started strong with one kill by OH Nicholas Mueller and three kills by OH Steven Roschitz. At 6-6 Team Freedom took the lead and extended it with three mini runs that included kills by setter Matt Elias, OH Christopher Vaughn, block by MB Matt Seifert, kill by OPP Joe Norman and service ace from Elias to 13-7. Tornadoes Roschitz and MB Chike Opurum made a valiant try to spark a comeback but Team Freedom found ways to curtail their efforts. Team Freedom hung on to their six point lead with some great side outs and finished off the set with Seifert and OH Christopher Nugent and blocked by Seifert for the 25-17 win.

Team Freedom took an early five point lead in the second set with a service run from Seifert’s ace; and kills from Norman and Vaughn. Roschitz stopped the bleeding with a kill. But then Team Freedom started another run with a series of kills by Roschitz and Vaughn; block by Elias and a Vaughn ace to extend the lead to 14-5. Although the Tornadoes passed well and played some good defense they just couldn’t score points thanks to Team Freedom’s defense, much of it as a result of good coverage covering, digging balls and good transition offense. Strong serving also helped Team Freedom dominate this set and win 25-10.

In set three the Tornadoes made a lineup change and took their first lead of the match at 5-4 thanks to some solid play from Roschitz who ended up with a team leading 9 kills. But Team Freedom built a lead on a run of blocks by Keith Kegerries and Seifert; and a Seifert ace to take the lead of 8-5. Both teams sided out until Team Freedom pulled away at 18-16 and won the match 25-19.

Team Freedom’s constant play coupled with Tornadoes poor hitting of 28% resulted in an easy sweep. Roschitz led the Tornadoes with 9 kills and Sequil Sanchez had 4 kills in a losing effort. Norman led Team Freedom with 12 kills and Nugent finished with 9 kills.

Team Freedom’s MB Milkhail Hoyt started the set with a clean kill and then followed up with a block and Jake Modetow added a kill. The Untouchables got off to a slow start with several hitting errors and fell behind 6-2. A Jose Castillo kill and Seirfert block along with two more Untouchable hitting errors increased Team Freedoms lead to 11-5. With kills and an ace from Christopher Nugent and kids from Jonathon Lutz, Team Freedom kept their lead at 16-10. After the time outTeam Freedom’s hitting errors gave the Untouchables opportunities to catch up with three kills by Nick Ramos, two kills by Will Ragland and one kill each by David Holiday and Paul Bilanzic to cut the lead to 24-22. But Team Freedom pulled off the first set win with a kill from Modetow.

In set three Team Freedom started Matt Seifert at MB. Both teams started off well. The Untouchables established the middle attacks again with kills by Bilanzic and Burrell; and Holiday added one kill. For Team Freedom, kills by Lutz and Nugent; dump by setter Ryan Kenney and blocks by Seifert and Hoyt gave them the lead at the first media timeout at 8-7. After the timeout the Untouchables’ hitters were unable to find the court. Team Freedom took advantage and built a seven point lead on a series of kills by Siefert and Nugent and a block by Nugent to 20-13. Untouchables sided out with kills from Bilanzic, Lutz, Ramos and Holiday. But two Untouchable hitting errors gave Team Freedom a 25-18 win.

Set four started out with the same intensity and good play as set three. For Team Freedom Hoyt, Lutz and Seifert provided the offense and Untouchables Burrell, Holiday and Ragland, who also had an ace. At 8-7 Team Freedom’s defense forced Untouchables into a couple of errors and down balls. During this stretch, kills by Nugent and Lutz, block by Hoyt and ace by Siefert gave Team Freedom a five point lead at 13-8. The Untouchables rallied back with an ace by Burrell and kills by Raglan and Bilanzic to cut the lead to 16-15. But Team Freedom bounced back with good defense and kills by Siefert, Nugent, Castillo, Lutz and block by Kenney to increase their lead to 24-18. Team Freedom won the match on a service ace by Kenney.

Despite the loss the Untouchables led by setter Kenney ran a balanced offense. Ramos led with 11 kills, Bilanzic 9, Ragland and Holiday 8 and Burrell 7. Untouchables also had 11 blocks, 4 by Holiday. For Team Freedom Lutz carried the load with 14 kills, Nugent 10 and Castillo 9; and 7 blocks.

Stunners’ setter Spencer Andrews injured his groin on the last point of the match against the Tyrants on Saturday so Matt Hilling, one of the rare versatile volleyball players played setter. It was the third different position Hilling played in this weekend’s NVA Event. In the other two matches he played Libero and OH. The Stunners also started four middle blockers, two of whom played different positions. Nick Amado at OH and Nick West OPP. Antonio Anguizola played the other OH and Shayne Beamer and Kevin Gear at middle blockers. The strategy behind this creative lineup was to rely mostly on big hitters and blocks rather than digging and covering defense.

The Stunners’ creative big men line up claimed an early lead with a kill by West and one block each by Gear and Beamer and a dump by Hilling to 8-7. Team Freedoms’ points came from kills by Joe Norman, Christopher Nugent and Christoper Vaughn. At 12-12 Amado sprained his ankle and Stunners substituted him with Joey Jarvis. The Stunners hitters struggled to find the court and Team Freedom took the lead on a Norman and Matt Seifert block to 16-13. A string of Team Freedom errors and kills by Stunners’ Jarvis, West, Beamer and Anguizola tied the set at 20-20. But the Stunners’ hitters again struggled to hit balls inside the lines and Team Freedom closed out the set with kills by Vaughn and Norman and won 25-23.

In set two five Stunners’ hitting errors gave Team Freedom an early 8-4 lead. During this run, Stunner’s only two scores were a kill and block by Jarvis. For Team Freedom Seifert and Norman each had one kill. At 11-5 Stunners substituted Chris Chapell’e for Anguizola. Errors continued to plague the Stunners and Team Freedom added to their lead with kills by Norman, Nugent and Seifert; and Vaughn with an ace and Seifert a block to 16-8. At 18-11 Stunners substituted Dillion Emery for West. Despite a kill by Jarvis and a Hilling block, Team Freedom added two more points to their lead at 22-12 on kills by middle blocker Mikheil Hoyte and Norman. But the Stunners didn’t give up. Emery scored four of the next five kills, Jarvis added and kill and Chapell’e’s kill and service ace cut the lead to 24-20. But Team Freedom sided-out on a Seifert kill and won the set 25-20.

While Stunners started off hot in the third set with kills by Emery and two service aces by Chapell’e and West, Team Freedom struggled to pass the ball. But Stunners’s errors and two kills by Vaughn before the first media timeout gave Team Freedom a two point lead before the first media timeout at 8-6. Stunners bounced back with consecutive kills by Jarvis, kill by Chapell’e and block by West to tie the set at 10-10. Team Freedom took a two point lead after a Nugent and Norman kill to 12-10. Both teams sided out with kills by West and Jarvis for Stunners; and Norman, Seifert, Vaughn kills and two blocks by Vaughn and Hoyte for Team Freedom. At 18-17 a dig by Libero Jake Hurwitz forced a hitting error by Team Freedom and tied the set at 18-18. Then a set dump by Norman found a hole in the Stunners’ defense that deflated their efforts for a comeback. Team Freedom followed with a block from Hoyte and a kill by Norman and took a 21-18 lead. After Stunners called a timeout, Jarvis scored on a kill to 21-19. Stunners struggled to side-out and Team Freedom scored the next three points with kills by Hoyte, Norman and Nugent to 24-19. After Stunners called their second timeout, Emery hit the ball out that gave Team Freedom a 25-19 win for the match.

Team Freedom finished the weekend with a 3-0 record and Stunners 0-3.